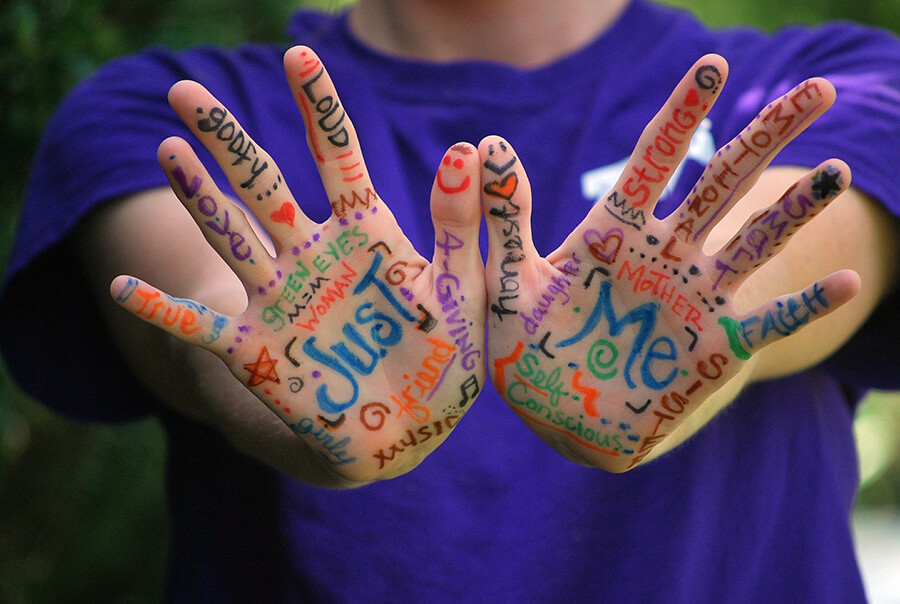 True/False: Emotional Intelligence is linked to knowing your emotions. Surprise!

Surprisingly, the answer is “BOTH AND”, but with a twist. Knowing your emotions does very little for your intelligence. People use tools like the emotion wheel to name emotions, ponder them a bit, develop epiphanies, yell “WOOT!”, and celebrate EI/EQ. “Not so quick”, says the Buddhist sage. Naming emotions doesn’t help your EI/EQ because it uses your left “thinking” brain, not your right “feeling” brain. What you “DO” with your emotions, in your right brain, is where the magic happens. Curious?

As with most things on the creative spectrum, the problem is Aristotle. And it’s deep. So, buckle up.

Aristotelian thinking, aka western logical thinking, can be summed up in two words “black” & “white”. Either/Or, This/That, Yes/No thinking enabled many big leaps forward for humanity. But it has severe limitations that limit creative expression, polarize us, drive wedges between our left and right brains, hobble us emotionally, and cause vast human suffering. “I’m right, your wrong” has led to countless wars between both people and nation states. This “either or” thinking is one of the main causes of cognitive bias such as the bystander effect, like when we don’t take action because we think someone else will, like with climate crisis, or a homeless person on the street, or a car accident victim. Many of us don’t take action because we think someone else will, right?

On the other hand, “Both And” thinking (aka Buddhist logic) is right brain thinking involving creativity, flexibility, emotional introspection etc etc. It’s like the yin yang symbol, with a dot of black in the white, and a dot of white in the black. Its highly nuanced thinking that involves deep reflection. Don’t get me wrong, a creative thought or emotional epiphany may very well start in the left brain, but it takes flight in the right brain. But our left and right brains are properly connected anymore, and its Aristotle’s fault. “Both And” thinking is like recognizing that there is a little bit of yang in every woman and a little bit of yin in every man. It enables us to understand and accept each other, with compassion, connection, humility, and grace. Both/And was discounted by scientist’s until quantum physics came along. Not only are their multiple perspectives, there are multiple dimensions. But that’s another conversation for another time! Pun intended.

Now onto emotions, especially big emotions; a pretty taboo subject in most of western society. When someone asks if we can feel our feelings, we say, WHAT? Take grief, for example. Who is comfortable with grief, fear, and sadness, among other biggies, and getting vulnerable and talking openly about them with friends? Like the grief we’re feeling right now with CO19 or knowing that the Climate Crisis will clobber us, regardless of what we do to stop it. Who is comfortable “being” with grief and “sitting” with it, like when you become “one” with an old rocking chair and a good book. Who gets enthralled and satisfied by exploring how grief makes you feel, what it means to you, what it feels like to lean into it and let it dissipate within you, what grief looks like in your life, what you have learned from it. Most of us haven’t got there yet. Not even close. But we must, if we are going to be able to handle crises like those we face today, from autocracy, to CO19, to climate, and the ongoing death of the oceans and the entire natural world. If we use our right brain, and our subconscious mind, we can tap in and learn to be at peace with these big emotions that haunt too many of us.

Therein lies the rub. Using a tool like an emotion wheel to figure out and ponder your emotions is all well and fine, and it’s a perfectly acceptable starting point. But its like learning a new language. Until you go to the place where it is spoken, and speak it and understand it when spoken to you, you don’t really understand it. Same goes with emotions. But with emotions, you only have to travel to your right brain, and your subconscious, and dive in, and explore what it means to feel your emotions. But Aristotelian logic, among others, have divorced us from this level of understanding.

Many groups exist out there to bring people together to explore the meaning of emotional intelligence. Sadly most of these groups, by their very definition, are based on back and white thinking, and simply don’t dive deep enough for participants to really learn much about their emotions. They overly emphasize what naming and pondering emotions will do for us. It turns out, not much.

It takes highly skilled, emotionally gifted facilitators to guide you safely into an exploration of the meaning of your emotions. It can happen surprisingly quickly. Its exhausting, yet stimulating work. But, thanks to CO19, we all have a bit extra time. What better way to explore your emotions than with a COACH! Your choice of coach matters greatly. Choose coaches that explicitly advertise talking about big emotions like grief, sadness, and loss. These are the coaches who have done the personal work to understand how to be with their big emotions and they can help you be with yours. Fwiw, Climate Coaches are specifically trained to deal with these very emotions! Let’s talk existential angst over tea! Really!

How Are You Feeling, RIGHT NOW? Many experts say, dive in, headfirst. →